17 In Products we Love

With 4 babies I am pretty sure I have tried it all, and figured out the best of the best, (and the biggest waste items) for babies. I am doing a full review of the Dock a Tot Grand and Deluxe in this post to help you decide if it is worth the buy.

When we had our 3rd child (FOUR YEARS AGO….where does the time go??) I knew I had to try the Dock a Tot. It was a newer on the item and slightly unabtainable purchase with our second baby so I was itching to see what all the hype was about.

We loved the deluxe which I reviewed here, and although he didn’t sleep in it every night, it made travel and naps so much easier on us.  That ended up bringing us to looking at the Dock a Tot Grand and deciding if that was worth the purchase.

In this blog post I will share the differences in the sizes and my thoughts on owning both sizes 4 years later.

What is the Point of the Dock a Tot?

Per the Dock a Tot Website – it is a dedicated napping and lounging spot for babies and toddlers. It is to be used supervised.

Per what I would say – most moms buy it as a place for baby to sleep for naps or bedtime, although as with anything else that goes inside of a crib or bassinet that is not recommended by safe sleep experts.

Is the Dock A Tot Safe?

I think this, as parents is our number one concern. When we got the Dock a Tot Deluxe with our son, Walker, I was SO NERVOUS about using anything new. We had used something called the Nap Nanny with my older two that was later recalled, and that had me crazy nervous.

I did lots of research on the safety, and felt very confident in the design and fabric choices that Dock a Tot made when designing their product, however still treaded lightly on infant use.

For us we used the Dock a tot as a portable napping space around the house, as well as a place for the baby to sleep for the first week or 2 in our bed. This is not recommended, but for me I found that doing so allowed for my anxiety of the baby being outside me to subside, while allowing each baby to have a dedicated place and not fully co sleep.

** This is not recommended by the company or the American Academy of Pediatrics – it was simply a choice I made for my family.

In my opinion – it is one of the earlier hard choices you have to make to decide what is right for you and your family.

I have mentioned the Grand and the Deluxe already in this post, and some of you are probably thinking – what the heck? Those are names for different sizes.

If you are pregnant and registering for a baby don’t even think about the Grand yet. You are only focusing on the Deluxe as that will get you through the first 8+ months of your babies life. Then you can make an assessment on if you want/need the Grand down the road.

Do You Really Need the Dock a Tot? An Honest Review from a Mom of 4

Alright So now you know what the Dock a Tot is – but lets talk about if you really need it. I will start this off with stating – I both LOVED the Dock a Tot, but also don’t think it is a need.

I have had 4 kids – all of which were pretty good sleepers, and I wouldn’t say I saw any better or worse sleep because of the Dock a Tot. It is a big investment – and many moms will swear by it – but don’t think that if you can’t afford it or don’t want to budget that in that your baby won’t sleep well.

I loved the Dock a Tot Deluxe for couch naps and such with my younger two, and did find it to be helpful because of how portable it was. I also did let both babies sleep in it for a few weeks when newborns which I felt maybe made them less ‘restless’ in their sleep – but honestly that only effected me not them.

Babies are super noisy and move a lot at night, so I think the combination of the extra padding and the cocoon feeling helped them to be more still – but in no way do I think it meant they woke up less.

I also would say as far as for day time help it is the most help during the first 6 or so weeks. After that I found that other pieces of gear were better for the movement.

You can actually see what months I used what in this series of posts I did with my 4th baby.

All in all – Do I think it is a worth while investment? I am a realist on what I tell moms to register for and I do always recommend this one. So yes – I do think so.

When to Move to the DockaTot Grand

So now to talk about the DockaTot Grand – I have both. The photos of the green leaves in this post are all the Grand – and I will be honest – for the first 3 years owning it didnt think it was worth it. Our babies didn’t sleep in the Dock a Tot Deluxe long term so it just wasnt a needed purchase.

That said – we were moving when Goldie (my 4th) was 1 and Goldie slept in the Dock a Tot Grand in the pack n play and is now a full on addict haha. So it has now been a very worth while while item for us.

All in all – I would say you should wait until your baby is old enough to get one. Moving to the DockaTot Grand normally happens somewhere around 9/10 months – the Deluxe is meant to seam snug before they move, and honestly moving them too soon can make you think they don’t like their new one.

If your baby is sleeping in the Dock a Tot nightly then I would say they will love the Grand just as much and it will be worth the investment – I have friends who’s kids used it daily for years making their bed seem more comfortable, so it is definitely worth looking into it.

Because this is a true and honest review from a mom of 4, I would say one thing to think about with using the Grand is if you fly very often or will have room to take this when you travel.  We are now getting ready to fly with our daughter who is almost 2 and I am dreading taking the Grand with us…but also..I love sleep.

The Dock a Tot Grand is a pretty big piece of baby gear, and if your baby is dependent on it, it could make travel tricky.  I would just put some thought into your lifestyle before you decide if moving them to the next size up is a good idea, or if that is the time to break the habit.

Differences in Grand vs Deluxe

Aside from the size – the DockaTot Grand is nearly identical to the Deluxe – but one thing that is different is when in use you never use the Grand buckled at the bottom.  You are to always leave it open just like you would on the Deluxe as your baby starts to get bigger.

This is done for safety and something may people don’t know about. The Grand comes in the plastic zip up case just like the Deluxe so it does make it easy for storage and for travel, so keep that in mind if travel is something on the radar.

Overall – DockaTot has been a brand that I have loved with my younger two kids.  They are cutting edge as far as coming out with fun, on trend prints and colors (which for me does matter – because if you are paying that price you want something you like to look at).  They take safety very seriously, and they are a product that in my opinion really helped my youngest two sleep well from night 1!

With my 4th baby I have been tracking the products I used month by month – be sure to check out this tab with the monthly tracking.  This can be helpful to see how long certain items remained heavily used in our home!

I am also linking to some other posts that you will love!

Pin the Photo Below for Later

Hopefully you found this review of the Dock a Tot helpful and are more prepared to make the choice on getting one. If you have any questions leave them below or reach out to me via Instagram (@arinsolange). 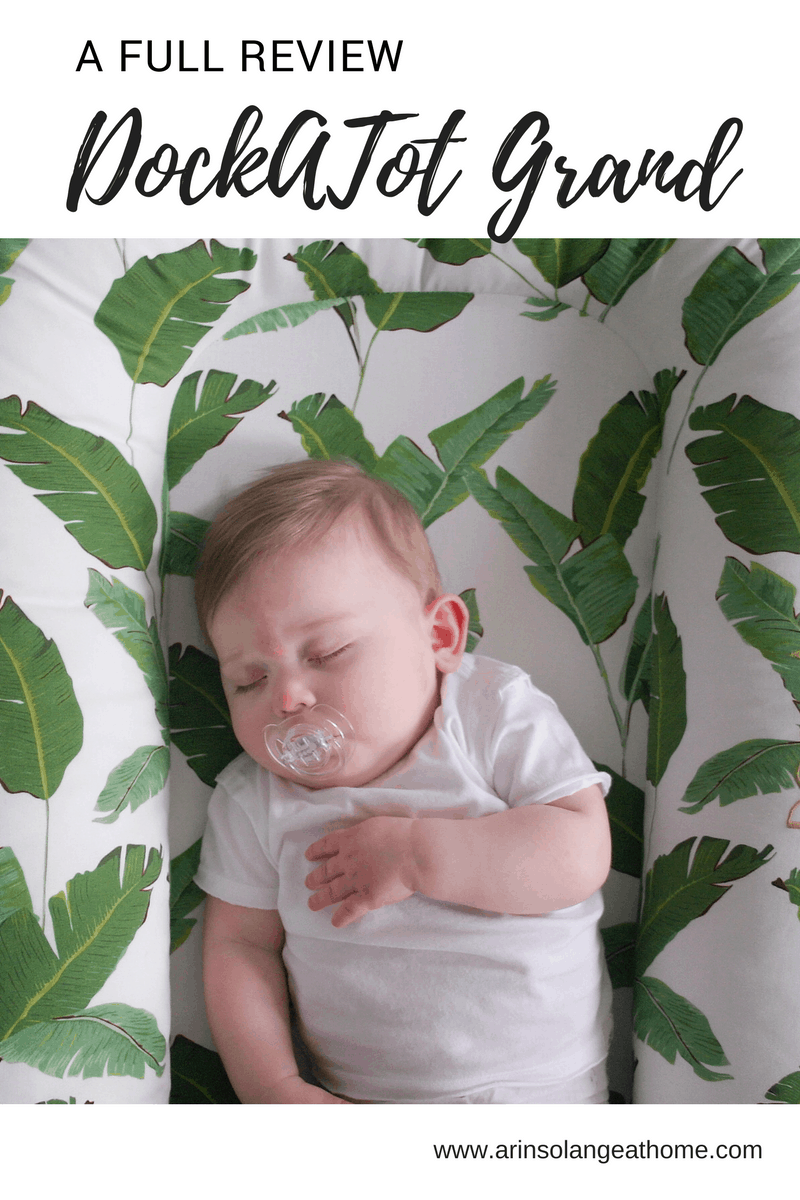 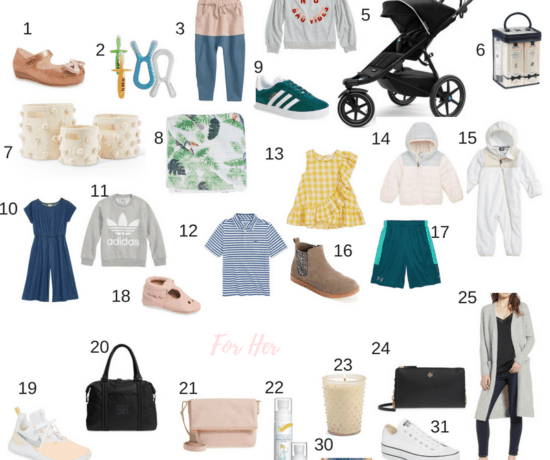 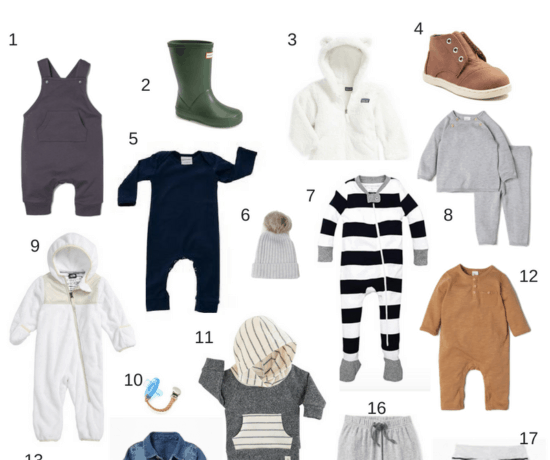 Back to top
32 shares