Peel and Stick backsplash has been on my list to try and review for you guys for a while, but I really wanted the right project to try it on. When we bought our new house I knew just what to do and set out to do a budget fireplace update utilizing the tiles.

Before getting into the budget fireplace, I want to talk about peel and stick backsplash. Incase you’re wondering what that is, it is essentially sheets of a thicker sticker material (so it is textured some like a normal tile) that is made to look like backsplash or tile.

There are several prints and patterns you can go with, and they all pose some unique things to keep it mind when you are using it, so be sure to read the how to closely in order to not waste any of the tiles.

I personally went with a herringbone pattern peel and stick backsplash that was really muted in color, and from every review had REALLY great stick, and looked very realistic. I figured why not try?

So incase you are new to my Instagram or blog – my husband and I recently purchased an 1860’s home to renovate. We are doing the bulk of phase one with contractors because we needed to get the house livable before moving in.

That also means that we are throwing the majority of our finances at phase one, so we will be working hard to do the rest of the rehab on a tight budget! My goal with the fireplace was to update the space on as close to $100 as possible.

We did it before the floors and walls were painted so we could be a bit messier and the professionals would be the ones who had to be careful, so keep in mind the rest of the room is still in its original – nicotine covered state ha.

What was I updating on the Fireplace?

In order to update the fireplace 3 things needed to happen:

First Up – Painting the Fireplace

First up was painting the fireplace – we followed a very similar method to painting our kitchen cabinets (see that post here!), and actually used the same paint.

There were tons of holes from a nail gun that needed to be filled with wood filler first too, so that was an important step. After that we did a spray primer which saved a ton of time, and made for easier application of the paint.

I actually decided to paint the marble that was on the top of the step up as well for a couple of reasons. I felt as though getting the peel and stick backsplash to look as good in that area was going to be tricky, and I heard that its not super easy to clean, so didn’t want it where my kids would be sitting and standing.

Painting the tile was just was easy as the wood and you wouldn’t have the slightest idea it was a different material in person after it was painted. Once the paint was fully dry we set out to do the tile.

This was not hard – but there are some really big things to keep in mind. Some of these things are things you should keep in mind no matter the pattern, but I will be talking through the exact steps on the herringbone backsplash I worked with.

What Supplies Do you Need?

Things to Know Before you Start

There are a few things to keep in mind before you get started. These are things to remember when it comes to ordering and or before you measure and cut each sheet.

How to Install Peel and Stick Backsplash

Now that you know those few little things – you should be ready to start installing your backsplash.

First things first pick a corner. For me I started in the top left. I took my first tile and I cut in a straight line to get the tile to squared off left side and top (when you get them they will be jagged with the lines of the tiles).

First things first pick a corner. For me I started in the top left. I took my first tile and I cut in a straight line to get the tile to squared off left side and top (when you get them they will be jagged with the lines of the tiles).

Remember where you cut them down to because you will do the same with the next tiles. IE for me I didn’t measure but rather cut down to exactly where a straight line could form.

Remember where you cut them down to because you will do the same with the next tiles. IE for me I didn’t measure but rather cut down to exactly where a straight line could form.

For me because the area I was tiling wasn’t huge I used a blank sheet of paper and traced my space to cut out the corner so I could utilize as much of that tile as I could. That was literally the only tile where had to cut the right and left side straight. LEAVE the bottom side in the triangular shape.

Measure your space and use a detail knife to cut the piece in a straight line. You can use scissors too, but I felt as though the tiles I did with the knife looked better.

You will have to both cut from the sides but sometimes cut down into the top as well. It is sort of like a puzzle, and don’t be shocked if you mess up a piece or two.

Applying the tiles is pretty easy. They are VERY sticky. When I placed each tile I nearly overlapped them and pushed them to the side or up to make sure they were SO CLOSE that you couldn’t tell there was a difference in the tile.

One thing you can do when it is done – which we did, was then take a clear silicone caulk and go around your edges. BE CAREFUL. I read reviews that the caulk doesn’t wipe off easily, so if you are nervous and think it isn’t needed – just skip that step!

Last but not least on this project was painting the fireplace metal all black. It was already mostly black with gold – which is pretty normal for an older fireplace, and it is a really easy inexpensive update.

All you need is THIS paint, a brush, and possibly some painters tape.

One thing to know is this is OIL BASED PAINT – so don’t get it on your skin – it is a pain to get off. I would also use a disposable brush if it’s just this project you will be doing.

You can either remove your doors and paint the gold – or in my case I simply opened the fireplace up and gave it a coat, let that dry and did a second coat. It was REALLY simple and updated the fireplace in a BIG way.

Overall this is easily a 2 full day project – for us it took longer because we don’t live in the house yet, but it is not super daunting.

Pin The Photo Below for Later

Hopefully you feel more confident in installing peel and stick backsplash and doing an easy, inexpensive fireplace update after reading this post. If you have any questions leave me a comment below or DM me on Instagram (@arinsolange), enjoy your DIY update. 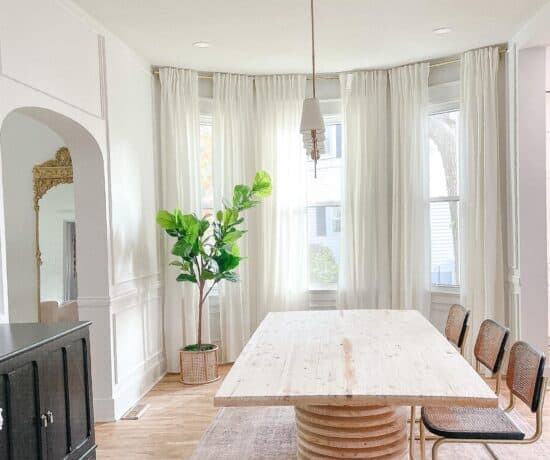 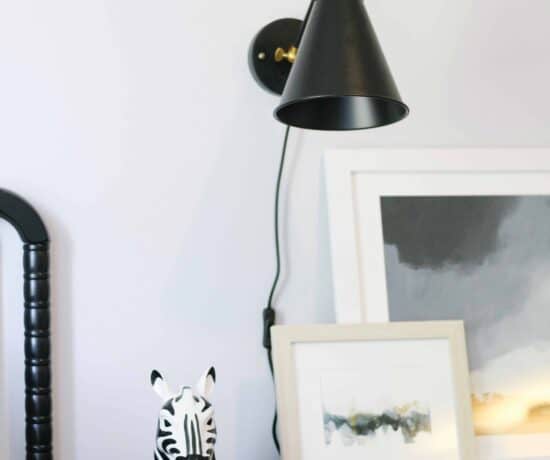